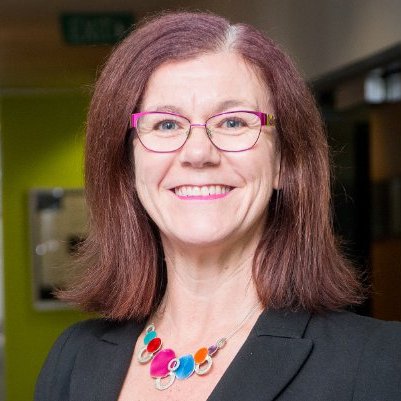 For IACM 2018 in Philadelphia, the local arrangements are being curated – yes, curated… I may sound like a smug hipster but trust me, your visit to Philly is worthy of being curated – by our President Deborah Cai, our Executive Director, Brandon Charpied, and me, who you may remember as the previous IACM Communications Director. There is one thing though – I am a Philadelphia neophyte. I hope my outsider’s perspective will lead me to asking, and finding the answers to, all the questions that other newcomers to Philadelphia will want to know.

Right, then, before you read another word, I think it is appropriate that those of you reading our newsletter on line should spend a few minutes watching a film clip from 41 years ago (really? that makes me feel old, does it you?), to get your in the mood. Go on – do not read another word until you have watched https://www.youtube.com/watch?v=NubH5BDOaD8

By the time we welcome you to Philadelphia on Sunday, July 8 2018, we’ll have applied our collective might to visiting various touristy destinations and testing the ambiance, the food and the beverages at various restaurants and bars. And let’s not forget the importance of finding a decent indie coffee shop – research will be done diligently! You will have to wait until early next year for the big reveal of what optional events and tours we’ll offer before the conference gets underway on Sunday evening. But let’s whet your appetite…

Last year Philadelphia was named the top U.S. destination to visit by Lonely Planet, which praised it for the revitalised downtown and for retaining its “deep American history and uniquely gritty flavor.” This deep history is scattered through an itty-bitty national park that covers different blocks in the downtown called Independence National Historical Park.

I expect all of the U.S. born and bred IACMers know that the Declaration of Independence was signed at Independence Hall in Philadelphia and adopted on July 4, 1776 – probably they could tell us who signed it, but that would just be showing off. The U.S. Constitution was also signed in Philadelphia in 1787. Alas, you cannot see the documents – they’re in the National Archives in Washington, DC – but you can tour the building. Independence National Historical Park is a popular place. During July this year, nearly 685,000 people visited, so you are encouraged to do a bit of homework yourself and plan your visit. The national park website is great (https://www.nps.gov/inde/planyourvisit/index.htm), and, for Independence Hall, you can pre-purchase timed tickets for a tour. The good news is that tickets and tours are free. The cracked Liberty Bell is just across from Independence Hall, and you just have to queue up for that. It is also free. 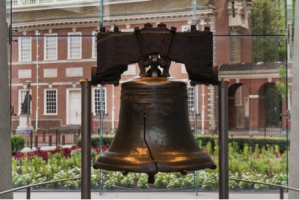 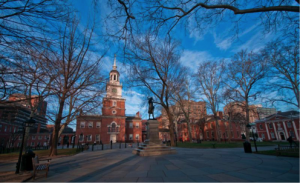 If you’re an art aficionado, Philadelphia will deliver on that front, too. The Pennsylvania Academy of Fine Arts (PAFA) is the oldest art museum in the U.S. and nurtured some of America’s great artists of the early 19th century. You might be like me and not know their names (Gilbert Stuart and Charles Willson Peale), but odds on, you will recognise their art. Even if you’re not into museums, I expect most all of us will be doing the run up the “Rocky stairs” of the Philadelphia Museum of Art. If you want something a bit quieter, the Rodin Museum looks exceedingly tempting, and it has over 140 of Rodin’s sculptures (http://www.rodinmuseum.org/). The Barnes Foundation (https://www.barnesfoundation.org/) looks like a place I must go – to see the Degas with yellow tutus.

You can probably tell I am not from Philadelphia as I haven’t yet mentioned Benjamin Franklin. He is their favoured son. He ran away from Boston to Philadelphia as a young man, but we can let Philly laud him as he did lots of stuff for the city: printing a newspaper, publishing and from what I gather he was big into corporate social responsibility – he set up the first library, hospital, and a fire fighting company in Philly, among many other firsts. When he retired, he figured out electricity – as one does. Later in life. Ben popped over to England and revealed some dastardly goings on of those Brits before heading home to play an important role in the independence movement. In all, he seems a rather worthy man, and you can learn lots more about him in Philadelphia.

Eating and Drinking in Philadelphia

It’s merely an observation rather than a fact, but over the years, I have noticed that IACMers like their food and drink (e.g., the rather long line for fresh Stroopwafel at the Leiden conference). So, let’s get down to the important stuff…

The first thing I wondered about Philadelphia, is whether it was home to Philadelphia Cream Cheese. Here’s a Philadelphia IACM2018 Fact: Philadelphia cream cheese is from New York and had nothing to do with the city of Philadelphia. The makers named it after Philadelphia because at the time, Philadelphia had a reputation of being the best dairy farming area around. Huh. 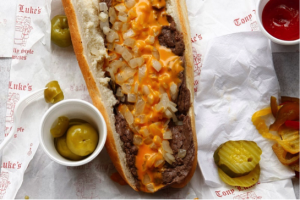 The town is famous for Philly Cheesesteaks. For those unfamiliar with this delicacy – it is a long roll filled with beef and melted cheese. The locals can order it with three words.

Whiz – This word refers to the purchaser’s choice of cheese. You have three choices: Cheez Whiz, which is a sauce and comes in a can (???? don’t ask me); American, which is a processed cheese; or Provolone, which is actually real cheese. Cheesesteak aficionados go for the neon-orange whiz because its liquid form means it better coats the meat.

Wit – local lingo for “with” and it mean with fried onions. You can also order it wit-out if you don’t want the onions.

The posher places may add extras and may even let you choose your bread. Anyway – it is pretty clear that I am talking from a position of complete and total ignorance, so I shall just direct you to this link about the best cheesesteaks in Philly http://www.seriouseats.com/2014/12/best-philly-cheesesteaks.html

Don’t worry – Philly isn’t just about cheesesteaks. Less than a mile from the conference hotel, the Reading Terminal Market is a veritable smorgasbord of high quality fresh food and places to eat and Philly has been named one of America’s best food cities by a bloke who should know – the food critic for the Washington Post. I hope to find a foodie walking tour to offer IACM attendees. Or a craft beer tour – I did mention both curated and hipster, didn’t I?

One new thing we will be doing next year, is nominating a local bar as a designated IACM meeting point. We figure when you are travelling alone and new to a city that it would be great to be able to go somewhere that you are likely to meet some friendly IACM faces. Better than sitting in the hotel lobby, right? We will be negotiating hard to see if we can get some happy hour prices for those wearing an IACM tag and maybe even get a designated room there.

Next year, we will have a dedicated conference center, separate from, but just a four-minute walk from, the conference hotel. Whether you’re presenting a full paper of your research on a panel or in a rapid-fire or novel session, or listening to the keynote address – you will be comfortably housed at Convene Commerce Square at 2001 Market Street. If you want a peek at the quality of the facilities, click on this link to admire it http://convene.com/location/commerce-square/

The conference hotel is the Sonesta Philadelphia Rittenhouse Square. Located at 1800 Market Street (that is close to 2001 Market Street, right?) it is in the downtown hub. Fortunately, this year I don’t have to fly across any ocean to get to the IACM conference, but if that fate awaits you – I have the perfect cure to jet lag… a swim in the roof-top pool. Excellent. So pack your swimmers! Here is a taster https://www.youtube.com/watch?v=v6K1cNL6P_Q and here is their webpage https://www.sonesta.com/us/pennsylvania/philadelphia/sonesta-philadelphia-rittenhouse-square

We will release advice about booking the hotel with the specially negotiated IACM2018 rates before the end of this calendar year. We will also offer a venue for seeking a roomie if you want to share.

Is it just me, or do you always want to know how the heck you’re gonna get to the hotel, too? Many of you are likely to arrive at Philadelphia International Airport. You have two options from there to town – you can catch a train on the local transit system (called SEPTA) for $8 one-way and get off at Suburban Station (that’s its name, promise) and walk for about 5 minutes to the hotel. The trains leave every 30 minutes. OR you can catch a flat-rate taxi (as we go to press the rate is $28.50) directly to the hotel. If you’re coming in by an AMTRAK train, you will arrive across the Schuykill River at 30th Street station. It is a 15-20 minute walk to the hotel, about a $10 taxi fare, or you can catch the transit to Suburban Station.

I am delighted to be working with Deb and Brandon on the local arrangements for IACM 2018. We will be providing updates on hotel booking and other stuff as our planning progresses. In the meantime, if you have any great suggestions on something you would like to see organised, then flick me an email at philly@iafcm.org.